The following is the full version of my story which appeared as ‘Holy Water’ in edition 321 of ‘The Big Issue‘ magazine in January 2009.

All images and text Copyright Charlie Sublet and available for purchase.

Inishbofin – Land of The White Cow

I fell in love at first sight once – her name was Inishbofin. Voluptuous, curvaceous yet rugged and rough around the edges, independent and powerful, she is an island unto herself. I spend only a matter of hours in her company but am infatuated and inspired by her to this day. 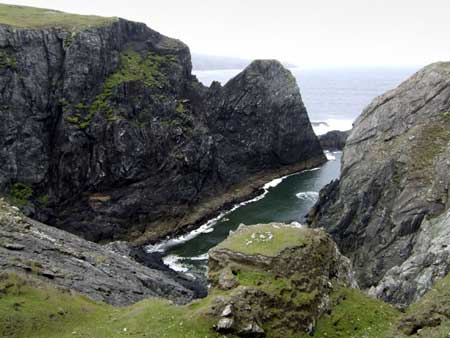 One version of folklore claims that, long ago, fisherman lost in fog became stranded on this island. After lighting a fire which dispersed the mist, they witnessed an old woman driving a white cow along a shingle beach between a lake and the sea. The old woman struck the cow, which turned to stone and when one of the fisherman challenged her, he also was transformed into stone. A far less dramatic version has it that a white cow was seen rising slowly from a lake by a shepherd tending his flock on the island. The lake in question took the name Lake Bofina and it is from these tales that Inishbofin takes her name: Inish meaning ‘island’ in Gaelic.

On this occasion, as I rolled across the sea and finally emerged into her harbour past the ruins of Cromwell’s 16 century barracks on the headland, goose bumps erupted joyously across my body in wave after wave. Months of pain gave way to a sense of euphoria as the serotonin gateways were flung open with abandon. It seems I may be more capable of falling in love with a place than a person – somewhere to plant my feet and lay my head with relative certainty. I feel more capable of withstanding (and in fact enjoying) the vicissitudes of Mother Nature than those of a lover. Perhaps it is because Mother Nature is honestly doing what comes naturally whereas humans’ motivations are too greatly influenced by the pressures of socialisation to be wholeheartedly trusted.

Disembarking the ferry I took up the opportunity of joining the local island ‘Tour’ aboard a rickety van driven by an equally rickety man: bony, unshaven and missing teeth, but with a wry smile and a glint in his eye which made me both wary yet excited about the journey ahead. It was as if he knew something that we didn’t (which of course he did). He had first visited the island some 30 years ago for a friend’s wedding and had now returned, minus the teeth, for a woman of his own. 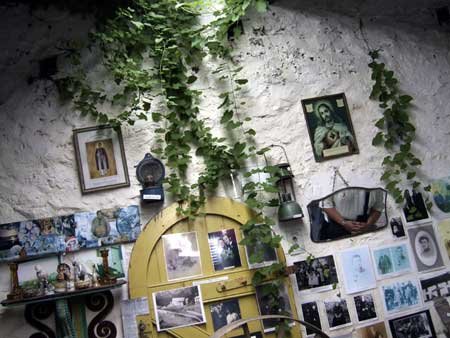 The van, the man and the tour were from the textbook of stereotypical isolated small island experiences…and it was great. A no-frills, plain label tour consisting of inaudible commentary delivered by our one and only driver cum guide. Our first official stop after leaving the pier was approximately 100 metres away… for a toilet break. Fifteen minutes later and it was off and away for the next hour during which our speed ranged from 3 kms/hour (at which point those who had previously decided against embarking on the ‘tour’ passed us on foot) to about 15 kms/hr, all along one-lane roads (with two way traffic).

Inishbofin lies 11 kms off the West coast of Ireland in the Connemara region which is famed for its ponies, numerous lakes and mountainous terrain. It’s population of approximately 160 folk is dwarfed by thousands of sheep whose backs are painted in patterns of iridescent red or blue – a method of identifying ownership. Farming and an increasing reliance on tourism provide the main income for the island. While there is an abundance of slate and sheep, virtually all other supplies must be shipped in, including the local priest. He holds mass on a Saturday at the only church, St Colman’s, where the holy water is dispensed from a 20 litre plastic keg in the entrance foyer. Pope John Paul II looks on from a small gilded frame in the background. 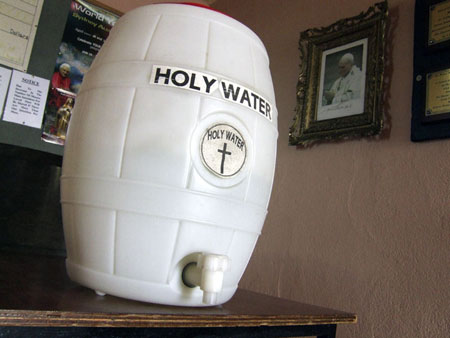 No police, one nurse, a once per week doctor, the once per week priest and of course the one pub, form the essential services. National School No. 18 has two teachers for the 20 primary aged children who are later shipped off to the mainland for their secondary education.

Early into the tour the driver interrupts his mumbled, inaudible commentary to answer his mobile phone. With one hand on the wheel and one on the phone we remain stuck in first gear – perhaps not such a bad idea given the narrowness of these one lane roads hemmed in by dry-stone walls and interspersed with random cyclists and pedestrians. After the safe conclusion to his phone call he explains we must make a detour to pick up a VIP. Now stop and think, what type of VIP is likely to visit this small and insignificant isle? The distinguished Prime Minister, heroic footballer or powerful sheep trader? We should’ve guessed – the Guinness Man. He has come from the mainland to clean the lines at the one pub and three hotels where this essential vitamin is dispensed. 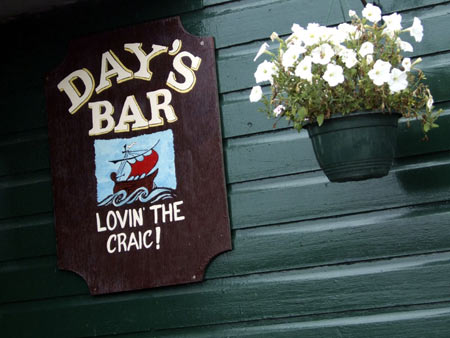 The tour comes to an end back at the pier. We have seen wonderful mountain and coastal scenery, a magnificent array of wildflowers, industrial detritus from the old fishing days, intricate dry-stone walling surrounding fertile pastures and traditional cottages, and we have survived modern eyesores like the ubiquitous prefab building and the airstrip which is currently under construction. We heard about the fur seal colony and the blow-hole, smelt the sweet essence of burning peat warming the cottages, witnessed the obligatory memorials to those lost at sea, scoured the ruins and overgrown cemetery and, most importantly, had the honour of being joined by the country’s leading VIP.

I take the last boat out, determined to return and see her again. And I do, the very next day. And after my second day, spent walking and talking, I am no less infatuated by her. Again, I take the last boat out, scheming in my mind as to how I can make her part of my life. Perhaps I could combine my previous incarnation as a tourism manager with my current existence as a photographer? But I would need to tread carefully around the ‘once bitten twice shy’ locals who were psychologically scared on a relatively recent occasion when a writer spent a winter there unearthing and then publishing some scandalous gossip. No doubt, as in any community, there are various dirty little secrets and family feuds lying just beneath the surface in the fertile soil, waiting for the right/wrong conditions to erupt.

Inishbofin is a strange yet endearing mix of pristine rugged beauty and wildlife, quaint cottages and ugly pre-fab buildings and discarded industrial items. But it works somehow to create an inspiring and intriguing atmosphere. Despite its proximity to the mainland and bustling village of Clifden, it has a sense of isolation and remoteness which refreshes the spirit. And a short enough tourist season (May – September) to keep the locals friendly and sane. Bitter winters and isolation are broken up by cool summers and visitors from foreign lands. A good balance and manageable love affair. 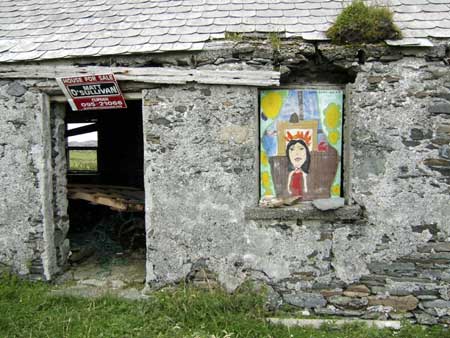 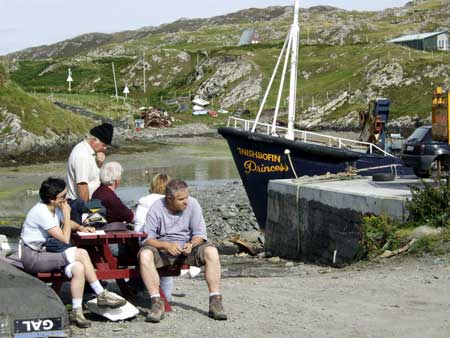 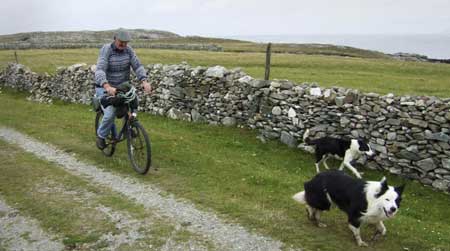 All images and text Copyright Charlie Sublet and available for purchase.